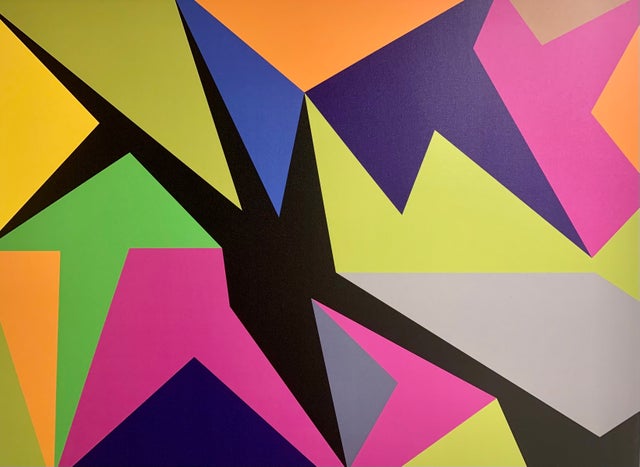 Sold out
SKU:
Add to Cart

This is a giclee print of an original painting by Fillmore Goldman. It depicts a modern, abstract, graphic composition in purple, yellow, green, pink and black. The size is 36" x 48" and it comes on wrapped canvas, ready to hang. The price is $1000.

"The CIVIL WAR IN ABSTRACT© painting depicts, probably, the most turbulent time in our country’s history, THE AMERICAN CIVIL WAR. This war fought, in the United States from 1861 to 1865, between northern states loyal to the Union and southern states that had seceded to form the Confederate States of America. The principal cause of the war was whether the enslavement of black people in the southern states should continue.

The black stripe down the middle of the painting represents the main reason for this war, BLACK SLAVERY. The blue triangle represents the Union army in the North and the gray triangle depicts the Confederate army in the South. As you face the painting you see different shapes, sizes and angles. These represent people that are alike but with different viewpoints on the issue. Relatives, friends, neighbors that were torn apart by a side that they very strongly believed in. The same colors on either side of the painting represents that one day, perhaps, they may have to meet on the field of battle against one another and pay the ultimate price, DEATH, for their beliefs.

The hope is, that as we look to the future, we can build a better America. Where all Americans, Black, Brown, White, Native, Asian and all others can live together in peace and harmony. Hopefully, then we can teach our children and grandchildren that no matter how good or bad our past was, they can learn the true history of our country. With the hope, they can learn together, grow together and can feel freer as they work to achieve their dreams, based on truth. With this as a goal, we move closer to real freedom and a true democracy."